With an undergraduate degree in Political Science and Philosophy, and graduate work in International Relations from Boston University, Claudine spent a great deal of time in the wine industry.  She spent three years working for Kendall-Jackson wineries and an additional two years as the Brand Ambassador for Moet & Chandon and Dom Perignon Champagne in New York while also teaching food and wine pairing for both the French Culinary Institute and the Sommelier Society in New York. In 2002, Claudine was named “Woman of the Year” by the Academie Culinaire de France – Filiale des Etas Unis. Claudine’s first book, Let’s Cook French, published in the spring of 2015, is a collection of thirty favorite, simple, classic French recipes in both English and French, illustrated by her father Jacques and daughter Shorey.

In 2016, Claudine was named the Godmother of Oceania Cruises’ ship Sirena. She has toured the country, and the world with Oceania Cruises, demonstrating recipes and culinary techniques with her father and her chef husband, Rollie Wesen. In 2016, together the three formed the Jacques Pépin Foundation (JPF) to provide culinary education and training to many communities, and individuals, especially those with barriers to employment. During the COVID pandemic, Claudine worked through the JPF to develop a video production company for her father’s home videos, and many other renowned chefs. She is the executive producer of the Jacques Pépin Cooking at Home series, published through social media. She is also co-owner of the Artistry of Jacques Pépin, a retail outlet for her father’s paintings.

Claudine, her husband Rollie, daughter Shorey, and mischievous puppy Bisous, live happily in Rhode Island. Her philosophy for food is closely tied to family. Claudine cooks at home almost every day, believing that sharing a meal with family and friends, eating, laughing and spending time together at the table is one of the most enjoyable and rewarding things in life. “Food doesn’t have to be complicated. It needs to be wholesome, nutritious and preferably well-seasoned. And, it’s always best when shared with those you love.” 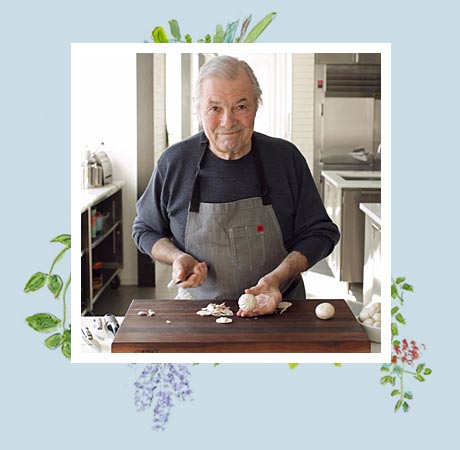